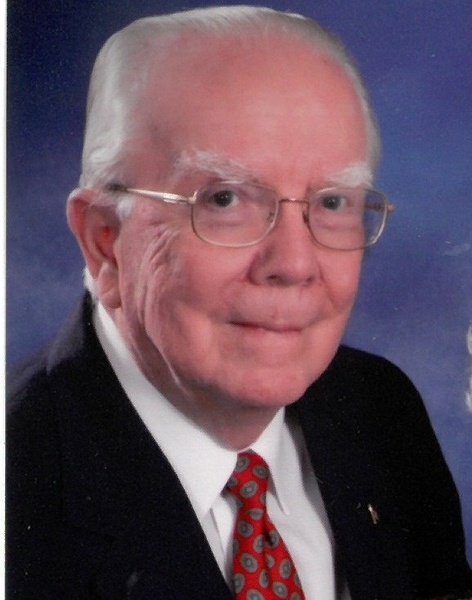 WEAVERVILLE– William Donnie “Don” Porter died Friday, March 1, 2019 at his home in Weaverville after a period of declining health.  He was 89.

Don was born June 10, 1929, in rural Cumberland County, NC.  His parents were William Alton and Nancy Helen Lee Porter.  He lived on a small cotton and produce farm as a child, but spent his teens in St. Pauls, NC.  There he excelled in academics and athletics.  He served as a diesel mechanic in the U.S. Navy from 1948-1953, working on submarine tenders and rescue vessels, mainly in Key West, Fla.

After an honorable discharge, he enrolled at NC State University in Raleigh on the G.I. Bill, graduating in 1957 with a degree in mechanical engineering.

Don and his wife, Mary Elizabeth Martin Porter, moved to Wilmington, Del., where he spent 11 years in the research department of E.I. DuPont de Nemours & Co., earning the first of 17 U.S. Patents.

In 1968, Don and Mary moved with their sons, Bill and Mark, to Asheville.  Don worked at Northrop Carolina and Zinser before joining American Enka (later BASF).  He retired in 1981 as director of research and central engineering for the company’s textile division.

Don belonged to First Baptist Church of Weaverville.  During his five decades there, he served as chairman of the board of deacons and Sunday School director.

His friends and family appreciated Don’s rambunctious wit and stories that bore the polished patina of countless tellings.  He enjoyed travel, particularly any road trip where he was behind the wheel. He adored his cat Big Boy.

In addition to his parents, Don was preceded in death by his older brothers, Durwood, Chester, and Fairley.

His funeral service will be held at 11:00 a.m. on Saturday, March 9, 2019 in First Baptist Church Weaverville. Burial will follow in Ashelawn Gardens of Memory, Asheville.

The family will receive friends at the church, 10:00 a.m., one hour prior to the service.

The family wants to thank the team at CarePartners Hospice, Visiting Angels and caregiver, Christy Chandler, plus members of Don’s church.

Flowers are welcome, as are donations to: First Baptist Church of Weaverville, PO Box 547, Weaverville, NC  28787. West Funeral Home is in charge of arrangements.

For those who desire, condolences may be offered to the family under Mr. Porter’s obituary at www.WestFamilyFuneralServices.com.

To order memorial trees or send flowers to the family in memory of William Donnie "Don" Porter, please visit our flower store.