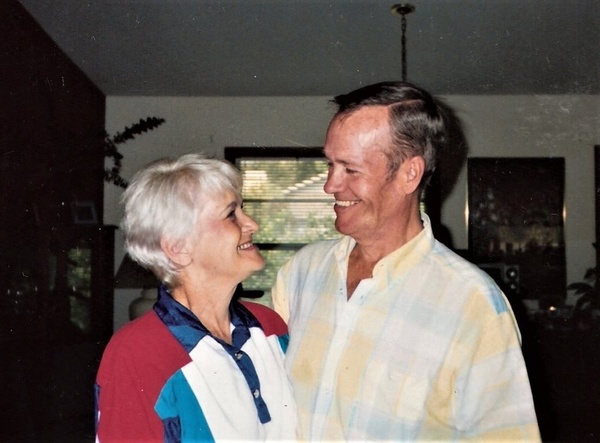 Mrs. Riley was born October 8, 1931 in Elizabethton, Tennessee to the late William and Edith Young. She spent much of her childhood growing up in the Montford neighborhood of Asheville, helping her parents with their successful photography studio.  She attended Hiwassee College in Tennessee where she met her husband of 61 years, Charles (according to Kit, she saw Charles on the tennis court and said “I’m going to marry him!”).  A proud military wife to Lt. Colonel Charles Riley, she was – at the time – the youngest woman to ever serve as the President of the Officers Wives Club in Miami.  Kit was a great swimmer, and in the 1950’s was a model for DeWeese Designs swimsuits.  She was an avid golfer, was fiercely competitive when challenging friends to games of Scrabble or Bridge, and had a deep love of the arts, expressing her creativity through needlepoint and crochet.  After many years of military life and living throughout the country, she and her husband relocated to Asheville where she worked as a counselor for alcohol and drug addiction, and later enjoyed volunteer work at Pack Place where she greeted visitors and gave tours.  Kit loved nature and all God’s creatures and was a friend to all animals! She was an incredible mother to her children, grandchildren and great grandchildren, and a true friend and confidante to everyone who knew her.  Kit was an incredible hostess -  she enjoyed cooking and entertaining, and made anyone who visited feel like family.  She was deeply loved by so many and will be very missed.

In addition to her parents, she was preceded in death by her husband, Lt. Colonel Charles A. Riley who died in 2010; and her son-in-law Chip Crawford.

Her funeral service will be held at 2:00 p.m. Sunday, March 21, 2021 in the Chapel of West Funeral Home, 17 Merrimon Ave., Weaverville. Reverend Charles Hutchins will officiate. Burial will follow in West Memorial Park, Weaverville.

Per the NC Governor, masks are required. Those who choose, may listen to the service on their car radio by tuning into FM 87.7, while in the parking lot of the funeral home.

For those who desire, condolences may be offered to the family under Mrs. Riley’s obituary at www.WestFamilyFuneralServices.com.

To order memorial trees or send flowers to the family in memory of Vera Riley, please visit our flower store.