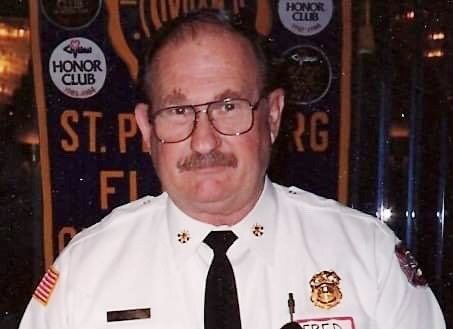 Fred was born February 16, 1934 in his grandparents’ house in Manatee County, FL to the late Loye F. and Flossie Mae Alderman Hawkins. He attended schools in Manatee and St. Petersburg, graduating with the class of 1952 from SPHS.  Fred was a Boy Scout achieving the rank of Eagle Scout in March of 1948.  After graduation, he took flying lessons and was awarded a private pilot’s license in November of 1952.  In February 1953 he enlisted in the USAF attaining Staff Sargent in 1955. Discharged in February 1957, he worked as an auto mechanic until March of 1965 when he became a professional firefighter.  He served 30 years thru all phases: FF, Firefighter Training Officer, EMT, Paramedic, District Chief, Rescue Chief, Division Chief and Fire Marshall.

In addition to his parents, he was preceded in death by a daughter, Sheryl Lynne Hawkins Snuffer who died in 2014.

For those who desire, condolences may be offered to the family under Mr. Hawkins’ obituary at www.WestFamilyFuneralServices.com.

To order memorial trees or send flowers to the family in memory of Lloyd Frederick "Fred" Hawkins, please visit our flower store.