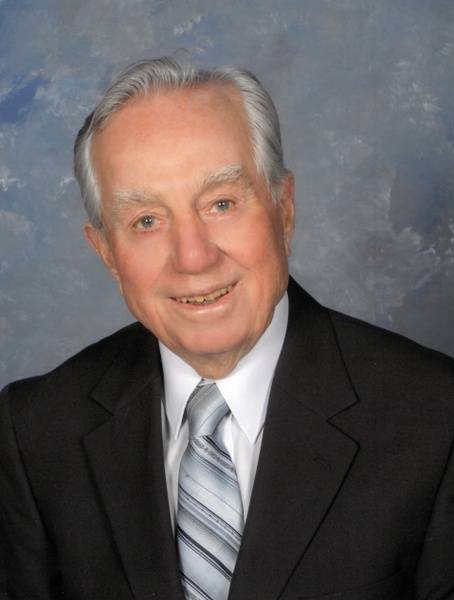 WEAVERVILLE - Earl Klappauf, 94, passed away peacefully at the NC State Veterans Home – Black Mountain on Saturday, May 29, 2021 surrounded by his beloved daughters. Earl was born in Chicago, Illinois, lived in Pompano Beach, Florida, and for the last 28 years called Weaverville, North Carolina his home.

Earl proudly served in the US Navy during WWII.  After the war he became an electrical engineer and spearheaded projects such as McCormick Place in Chicago, the Omni Convention Center in Miami, a power plant In Titusville, Florida and many other premier projects.

He was proceeded in death by the love of his life, Mae Klappauf.  They celebrated their 50th Wedding Anniversary in 1995 six months before her passing.

Earl is survived by his daughters: Candace Mullenix (TJ Mullenix) of Texas, Joanne Klappauf (Stephen Brown) of North Carolina, and Susan Rose Ditzler (Donald Ditzler) of Virginia.  In his last year, he often wore a t-shirt that proclaimed, “You don’t scare me, I have three daughters!”  Earl was also blessed with four grandchildren and three great grandchildren.

He faithfully attended St. Eugene Catholic Church in Asheville where he enjoyed a rich fellowship.  Earl loved to work in and around his yard and house, walking and visiting at Lake Louise and participating in neighborhood celebrations.

The family wishes to thank the staff at the NC State Veterans Home – Black Mountain for their compassionate care of Earl in his last year of life.

The family will receive friends from 4pm to 6pm on Monday, June 7, at West Funeral Home, 17 Merrimon Ave., Weaverville, NC.

In lieu of flowers, donations may be made for a memorial bench at Lake Louise by sending gifts to “In the Memory of Earl R. Klappauf”, PNC Bank, 81 Weaver Blvd, Weaverville, NC 28787.

Condolences may be sent to the family through the website, www.WestFamilyFuneralServices.com.

To order memorial trees or send flowers to the family in memory of Earl R. Klappauf, please visit our flower store.