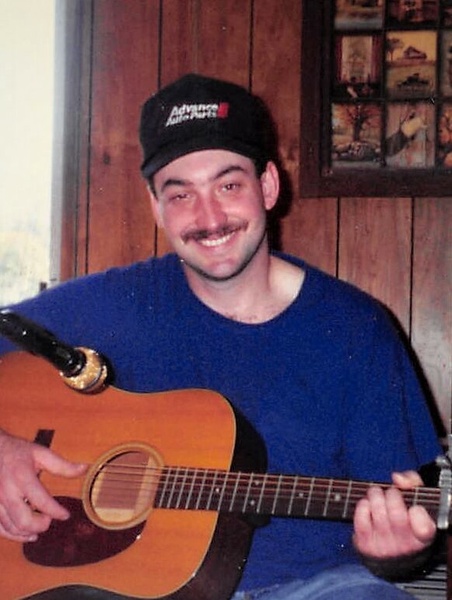 He was born March 3, 1971, in Washington, DC. Charlie was a resident of Barnardsville, NC since the age of three. He was a renowned bluegrass guitar “picker”, having played with the likes of Bill Monroe, who tagged Charlie’s group as “The Bluegrass Tarheel Boys” when starring at NB High School in the 80’s.

Charlie was a highly respected auto mechanic who was well known for his repair acumen in the field. He and his dad were the proprietors of Hensley’s Auto since 2000. Charlie raced at the old Asheville Speedway and managed to win a few races in the stock car he and his dad built.

He was a dedicated husband and father. His pride and joy was his son, Pierson. Charlie never missed one of Pierson’s baseball games, no matter how far away the game was. Never has a father loved his son as much.

Charlie will be sorely missed by all his family and friends. He is happy and well now that he is with his dad and friends that have passed on before him. I know they are smiling down on us or having a good joke.

He is survived by his wife, Robin; son, Pierson; and his mother, Pat.

A celebration of Charlie’s life is being planned on his favorite holiday, July 4, 2022. Time and location will follow. Save the date.

For those who desire, condolences may be offered to the family under Charlie’s obituary at www.WestFamilyFuneralServices.com.

To order memorial trees or send flowers to the family in memory of Charles Keith Hensley, Jr., please visit our flower store.
Send a Sympathy Card