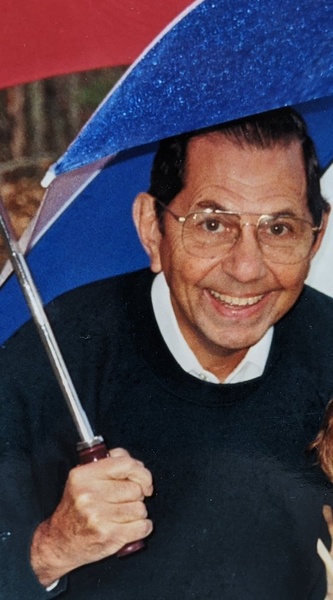 We are profoundly sorry to announce that Chandra Gopi Kumara Menon (Gopi), age 89, passed away Friday, August 28, 2020, with his daughters at his side.

Gopi was born March 6, 1931, in London, England, son of the late Kumara Padma Chandrasekhara Menon and Elizabeth Christina Day Menon (Leila). Shortly thereafter, the family returned to his father’s homeland in India. He spent his childhood and continued his higher education in Madurai. As the eldest of five children, he was looked up to and loved dearly by his younger brothers and sisters - he set a shining example of dignity, decency, dapperness, and decorum, while also being a happy participant in much mischief. After completing his studies, he worked for the Indian Embassy, greeting foreign dignitaries and coordinating their activities in India. His work for the Embassy then continued for several years within Indochina, finally relocating him to New York in 1962, where he completed his service for the Indian consulate and transitioned to a career in computer programming. There, he met the love of his life, Patricia, after she spilled a drink on his shoe. After a whirlwind courtship, they were married on February 19, 1967 (when you know, you know, and by golly, they knew!). In the following years, two daughters joined the family. They initially lived in New Jersey, eventually settling in Florida, where they lived for 25 years and raised their family.

Gopi was deeply committed to his faith; he and Patricia were active in Marriage Encounter during their time in Florida, and in other church ministries throughout their lives. They made many lifelong friends in the process. Gopi and Patricia retired to the mountains of North Carolina in 1999, spending their golden years surrounded by their children and grandchildren. After Patricia’s unexpected passing in 2013, Gopi spent the remainder of his days showering his daughters and grandchildren with love, though Patricia was never far from his thoughts. Gopi lived his life in service to others in all ways, both within and outside the church. Even after retirement, he spent many years volunteering his time doing taxes at the local library during tax season, and found great joy in doing food deliveries for Meals on Wheels. He considered each person on his delivery route a friend, and spoke of them often and with great fondness. Anybody who met Gopi knew that he was truly one of a kind, a warm and generous soul, the closest thing there can be to an angel on Earth. Every one of his acts were acts of kindness. He wouldn’t hesitate to give his last possession to somebody in need, and would find joy in doing so. If you ever needed him, he’d be there with his radiant and warming smile - likely running late (as is the Menon way) and lalala-ing one of his signature tunes. He saw every glass as half full and every stranger as a friend. He loved with all his heart, and brought light and love to this world, deeply enriching every person who knew him. We will miss him beyond measure.

In addition to his parents, he was predeceased by his wife, Patricia, and his sister, Janaki Menon. He is survived by his daughters, Shirin Menon and Leila Elliott and husband Matthew; his grandchildren Tyler Menon, Aubrie Elliott, Ryan Menon, and Addison Elliott; his brothers Balan Menon and Krishna Menon; his sister Sheila Pahuja; and many nieces, nephews and extended family. A celebration of life will be held at a later date when safety permits. In lieu of flowers, donations may be made to Meals on Wheels at http://www.mowabc.org/donate, an organization close to Gopi’s heart. For those who desire, we invite you to share your favorite memories and/or pictures, under the Tribute Wall tab, on this page.

To order memorial trees or send flowers to the family in memory of Chandra Gopi Kumara Menon, please visit our flower store.