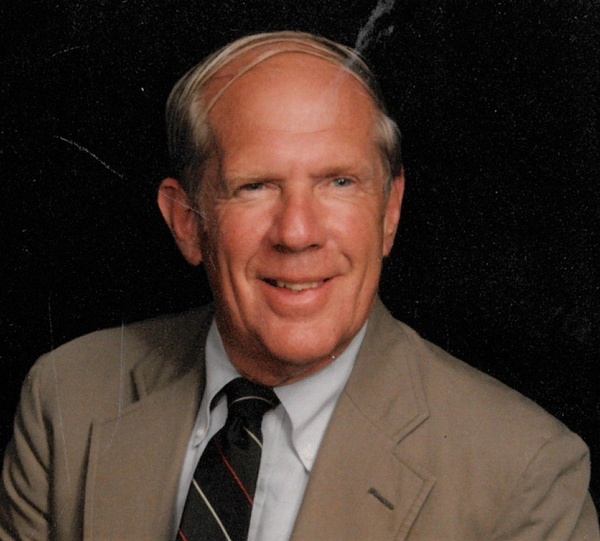 Carl is survived by his dear companion, Pat Starnes, of Asheville; his three children, Susan Brooks Loftin and her partner Bryan Boone of Weaverville, Patricia Landis Loftin of Anchorage, and Edward Armfield Loftin of Annapolis; and his two grandchildren, Grace Adelaide and Samuel Wainwright Loftin, also of Annapolis.

Born in Asheville on August 20, 1936, Carl was the son of the late Nellie Holmer and Edward Landis Loftin, and raised in Weaverville with his sister, the late Patricia Loftin Spear. He graduated from Lee Edwards (now Asheville High), Davidson College, where he was a member of the Phi Gamma Delta fraternity, and the University of North Carolina School of Law. Carl served as a law clerk for Justice R. Hunt Parker of the North Carolina Supreme Court, then joined his father in his Asheville law practice. In 1973, Carl joined Redmond Stevens Loftin & Currie, later becoming Roberts & Stevens, where he remained until his retirement in 2007.

Carl was a long-time member of both the Kiwanis Club and Asheville Civitan Club. He served on the board of the American Red Cross, the Pisgah Girl Scout Council, and UNCA, at one point serving as chairman. He was a member of All Souls Episcopal Church in Biltmore for many years, and later Grace Episcopal in North Asheville. He also quietly gave to many charities.

As his nicknames “Frosty” or “Captain Carl” imply, Carl was unquestionably a colorful character. He had a deep knowledge of the people and places of his home and brought them to life through stories. A visit to Carl’s kitchen was sure to bring laughter, but you’d likely have to earn it. He was fond of giving orders as he held court from his leather recliner and had in recent years gotten in the habit of simply rattling his empty tumbler with a mischievous smile, expecting an iced tea refill. He took great pleasure in making people laugh, whether lifelong friends and family who had heard his stories and jokes countless times, or an unsuspecting newcomer, unaware they were about to get their leg pulled. His Weaverville yarns were some of his most masterful, riotous and charming slices of small-town life, stories of hijinks and antics, for sure, but also stories of good deeds and good people.

Known to get a bit testy, Carl wielded an effective palette of expressive language at such times, though he had softened in later years. He could still get fiery from time to time and didn’t suffer fools gladly, but he was so much more. He could recite poetry by heart and would tear up when reading The Gift of the Magi during the holidays. He was a ginger snap aficionado, ate Peanut M&Ms by the pound, and had an abiding love affair with Pepperidge Farms Swirl bread, Triscuits, and coffee ice cream. The lucky among us were on Carl’s cheese straw list, and he baked each year during the holidays for decades. According to Carl, the specific hand-cranking cheese straw device was indispensable.

Carl found great pleasure in simple things, from the activity of a rufous-sided towhee outside his window to his granddaughter jumping from his hearth with the aplomb of an Olympian. He frequently described quality food items as, “gooder than snuff on nanners.” He was a voracious reader of fiction and nonfiction alike, from Lonesome Dove to biographies and history. He shared books with family and friends and would pester you for prompt return so he could lend it to someone else. For many years, he kept score of each North Carolina basketball game on a legal pad and had little interest in the official box score. He loved animals, especially dogs and the wild birds at his feeders. He loved looking after his plants, and his back porch in the spring and summer was lush with ferns and flowers. From that same porch, at night, he could call a distant owl to the trees surrounding his house.

His sharp mind was one of his greatest assets. His recall of history, family events, and music was legendary among his friends and family. Some have said that he relied on his smarts a little too heavily, skipping law school classes to focus on poker and beer while still maintaining exceptional grades. He was also great at solving minor household problems through feats of amateur engineering. Once when birds knocked down and shattered a shoddily constructed feeder, he reconstructed it in such a way that he claimed it could withstand a visit from a condor. Carl’s Great Depression and World War II era upbringing and thrift was once illustrated by his construction of a plastic baggy drying rack resembling a football goalpost he never met a 2X4 he didn’t like or couldn’t use. He was also a model railroad hobbyist and meticulously built several large layouts during his lifetime, which were beloved by his children, grandchildren and their friends.

In his younger years, Carl enjoyed hunting and tennis, and he golfed and fished until late in life. He also liked to take walks in his neighborhood and around Beaver Lake. Since his retirement, he enjoyed extensive travel in the US, Canada and Europe, often with his companion Pat Starnes. He also took many classes at UNCA’s College for Seniors. Visits from his grandchildren also brought him great joy. His granddaughter remembers him as “caring, loving, and funny.”

In lieu of flowers, donations can be made in Carl’s honor to:

For those who desire, condolences may be offered to the family under Mr. Loftin’s obituary at www.WestFamilyFuneralServices.com.

To order memorial trees or send flowers to the family in memory of Carl Wainwright Loftin, please visit our flower store.
Send a Sympathy Card